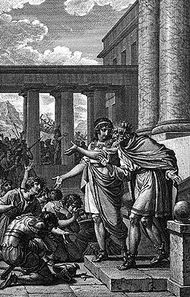 Aiakos was the king of the island Aegina in the Saronic Gulf, according to Greek mythology. He was the son of Zeus and Aegina, and was born on the island Oenone, later named Aegina. He had two sons, Telamon and Peleus, who killed Phocus during a competition.

While Aiakos reigned in Aegina everyone knew him for his justice, righteousness, and piety, and he was called upon to settle disputes between men and even gods when they were unable to come to a solution. He was favored by gods and men, and was so favorited, that when a drought had come to Greece in consequence for a murder that was committed, the oracle of Delphi said it would only cease when Aiakos prayed to the gods that it might. The drought ceased as the oracle predicted, and showed his gratitude by building a temple for Zeus on Mount Panhellion. Afterward the Aeginetans build a sanctuary called Aeaceum, which contained a square palace consisting of four white marble walls. Aiakos was believed to have been buried under the alter at this enclosing. In the writings of Pindar, Aiakos helped with the building of the walls of Troy along with Apollo and Poseidon. When the walls had been finished, three dragons rushed against the walls. Two of the dragons lay dead, the ones that had hit the walls built by the gods, and the third made its way into the city through the wall Aiakos had built. After this happened, the oracle predicted the city of Troy would fall through the hands of Aiakos' descendants. Also, he was believed by some to have surrounded the island with high cliffs for protection against pirates.

After his death, Aiakos became one of the three judges in Hades. He is represented with a sceptre and the keys of Hades, and he holds sanctuaries in Aegina and Athens. The Aeginetans regarded him as tutelary deity of their island.

According to some accounts and traditions, Aiakos was the son of Europa and when he was born, Zeus changed all the ants on Aegina to the men that Aiakos ruled over. A different tradition says that when Aiakos was born, there were inhabitants of the island. During Aiakos' reign, Hera, jealous of Aegina, sent a fearful plague or dragon to the island. All the men there ran off, and Zeus replaced them by changing the ants into men.

Alexander the Great claims to have traced his ancestry to Aiakos.