The Hecatonchires, The Hundred Handed Ones 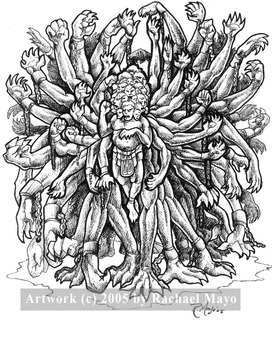 The Hecatonchires (Heck-uh-tawn-kires, Heck-uh-tawn-keeres) were the offspring of Gaia and Uranus. They had one hundred hands and fifty heads, and their strength surpassed that of all the Titans. There were three Hecatonchires, Briareus, Cottus, and Gyges, and they later became guards of Tartarus. During Titanomachy, they fought on the Titans side, though they lost. They were amongst the Protogenoi, and they are often used as reasons for the earthquakes or waves in the sea. In the beginning of their lives, Uranus saw them as monsters and threw them into Tartarus for one million years where they were guarded by the dragon Kampe. Zeus later rescued the Hecatonchires and they joined the gods side of the Titanomachy. They threw mountain-sized rocks one hundred at a time, and this overwhelmed the Titans so they lost. The Hecatonchires were the reason why the Titans lost the war, and Briareus, after Titanomachy became Zeus' bodyguard.

Briareus, when he was guarding the Titans in Tartarus, was called by Zeus one day. He came storming up to find Zeus tied with 100 cables and unbreakable knots. Briareus wasn't aware of the unbreakable knots, but he still snapped them without a thought. After this, he still was sent back to guard the Titans.
The Site of All Official Greek Mythological Concepts and Vocabulary