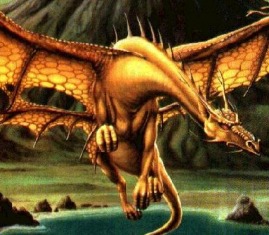 Kampe (Komp) was a she-dragon with a scorpion-like tail and razor sharp teeth. She had two gigantic dark wings and deadly claws that would cut you open with one swipe. Sometimes she held two poison tipped swords as her weapon for destruction. Kampe was the guard of Tartarus and guarded the Hecatonchires and cyclopes in particular. This took place in the Titanomachy, or Battle of the Gods vs. Titans. In the end, many Titans were defeated and thrown into Tartarus. What happened to Kampe was Zeus killed her and cast her into Tartarus, like many other monsters, and the Cyclopes and Hecatonchires were free. As a gift of appreciation, the Cyclopes welded Zeus his master bolt. Little do some know though, Kampe still lurks in the bottom of Tartarus, not dying. Monsters can be destroyed temporarily, but never permanently. 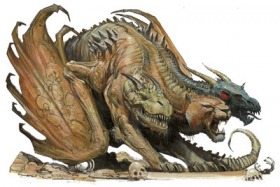 Chimaera (Ky-mair-uh) was a female beast that was , I guess it's a daughter-like thing of Echidna and Typhon. It lived in a cave filled with bones from its last victims that wondered so far as to actually see the Chimaera face to face. This was one of the more deadly monsters and it had three heads with a tail almost as dangerous as the heads. It had the speed of a lion, and the strength of all the three animals on its neck combined. It had some very tactical features such as being able to have two heads asleep and resting while the third head was awake the seeing if anything was coming. It had three heads: One of a goat, one of a snake, and one of a lion. Bellerophon was a hero who slew this monster while riding the winged Pegasus and striking the monster, knocking one head off at a time. Each head had the capabilites of the normal animal, so the three heads together made one dangerous monster to fight. The Chimaera could in fact, breathe fire out of it's mouth, and was basically resistant to all fire itself. 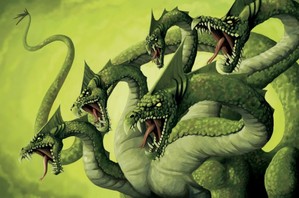 Hydra (High-druh) was an extremely endurable son of Typhon and Echidna. It was 7 to 8 feet tall in height and had 9 heads. Eight of its nine heads were mortal and could easily be destroyed, but there was a giant head in the center that was immortal. If ever it was sliced off, it became a spoil of war. Each head had a slithery snake tongue and little, but sharp teeth. Each head has an extremely venomous bite, killing you seconds after you are bitten. The blood, too, is poisonous to the touch, which is pretty cool. Every time you cut a head off of a hydra, two heads grow back into its place. The only way to kill a hydra is to burn the neck after you cut the head off, just as Hercules did in his 2nd labor. Hydra is not exactly the most mobile creature, and it sticks to one place in particular such as its lair. Each neck that is has is a few feet long, as well as the center head. Hydra is not the most dangerous monster, but it is highly durable and plays a good offense. 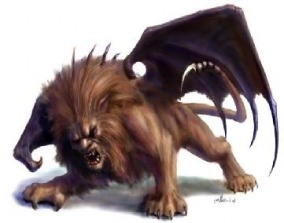 Manticore (Man-ti-cor) was another highly dangerous, and highly stealthy threatening monster. The Manticore was a combination of a lion, scorpion, and dragon. Above its shoulders, it held dark, and gruesome dragon wings. They were not as much for flying as so much for just looking threatening. It had the body of a large lion, along with the face of a lion. It had a metallic scorpion tail that shot poisonous spines at people. The spines were very deadly, and could kill you within a minute of getting hit. Its claws were as deadly as any lion's, meaning they could put a fun-size gash right into you. It had 3 rows of sharper than razor teeth that would chomp on you as soon as you fell to the ground dead. Its tail, the scorpion like metallic thing that shot shot spines at people, re-grew its spines as soon as they were shot. To sum it all up, this is one of the most deadliest monsters in Greek Mythology. Chimaera was stealthy too, which made it even more dangerous. If you wandered into the woods, the Chimaera would most likely be sneaking up on you behind the trees off to the side. It attacks you from the side, as oppose to making a frontal appearance that may cause a real fight. No hero (that I am aware of) has ever killed the Chimaera.

The Hecatonchires      The Hundred Handed Ones 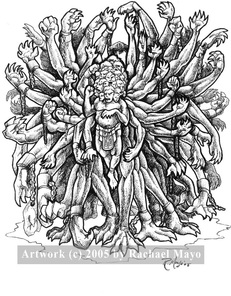 The Hecatonchires (Heck-uh-tawn-kires, Heck-uh-tawn-keeres) were the offspring of Gaia and Uranus. They had one hundred hands and fifty heads, and their strength surpassed that of all the Titans. There were three Hecatonchires, Briareus, Cottus, and Gyges, and they later became guards of Tartarus. During Titanomachy, they fought on the Titans side, though they lost. They were amongst the Protogenoi, and they are often used as reasons for the earthquakes or waves in the sea. In the beginning of their lives, Uranus saw them as monsters and threw them into Tartarus for one million years where they were guarded by the dragon Kampe. Zeus later rescued the Hecatonchires and they joined the gods side of the Titanomachy. They threw mountain-sized rocks one hundred at a time, and this overwhelmed the Titans so they lost. The Hecatonchires were the reason why the Titans lost the war, and Briareus, after Titanomachy became Zeus' bodyguard.

Briareus, when he was guarding the Titans in Tartarus, was called by Zeus one day. He came storming up to find Zeus tied with 100 cables and unbreakable knots. Briareus wasn't aware of the unbreakable knots, but he still snapped them without a thought. After this, he still was sent back to guard the Titans.

A nymph is a female deity of something in nature that typically enjoys singing and dancing. They always took shape as young maidens, and could not die from old age or illness. If they were mated to a god, their children would be fully immortal. This species is not usually violent or war-related, as they are just peaceful forest, spring, grove, etc. dwellers. There are 14 species of nymphs, and they are as follows: Alseid, Auloniad, Crinaeae, Dryads, Hamadryads, Hesperides, Limnades, Meliae, Naiads, Napaeae, Nereids, Oceanids, Oreads, and Pegaeae. There is not much information on most species of nymphs.

An alseid (Al-sayd) was a nymph of a glen or a grove. The only poet to ever use the term alseid was Homer, but instead of using alseid, he used the term alsea.

An auloniad (Uh-low-knee-add) is a nymph of mountain pastures or vales, which were often in the company of Pan, the god of nature.

A dryad (Dry-add) was a nymph specifically of an oak tree, though some people associate them as nymphs of all trees. These nymphs especially were very shy to other creatures, except for Artemis whom all the Nymphs loved. 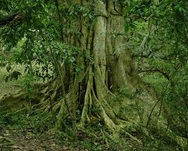 Hamadryads (Hom-uh-dry-adds) are Greek Mythological beings that live in trees. They are a specific type of dryad. Hamadryads are born bonded to a certain tree, and people believed they were the tree and that dryads were just entities of the tree. When the tree that the Hamadryad was bonded to died, the Hamadryad died as well, which is why gods and dryads punished humans that damaged trees.

The Hesperides (Hess-per-eyed-zz) were nymphs that tended a blissful garden at a place in a far Western part of the world, near the Atlas Mountains and at the edge of Oceanus, the world-ocean.

The Meliae (Meel-ee-eye) were nymphs of ash trees, with which they shared a name with. The Meliae were born from the blood of Uranus, and sprung mankind of the Bronze Age. They also nursed and fed the infant Zeus honey in the cave of Dikte. 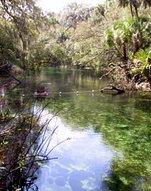 Naiads (Nye-adz) were a type of nymph who presided over fountains, streams, brooks, and wells. Many nymphs fall under the category of naiad, such as the Pegaeae. Naiads were generally associated with freshwater, Oceanids were associated with salt water, and the Napaeae were associated with the Mediterranean. The Greeks thought of all the bodies of water as one, so there was overlap, meaning that a Naiad could cross salt water and go through the Mediterranean to surface somewhere. If the spring that a Naiad was bound to dried up, the Naiad died,

The Napaeae (Nuh-peye-eye) were nymphs that lived in wooded valleys, glens, or grottoes.

The Nereids )Near-ee-idz) are sea nymphs, and the 50 daughters of Nereus and Doris. They are sisters of the Nereites. They are normally accompanying Poseidon, and they can help sailors during perilous storms. They are associated with the Aegean Sea, and were known to live with their father in a silvery cave. 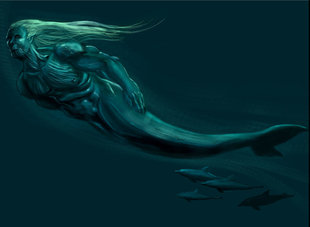 The Oceanids (Oh-she-ann-id) in Greek Mythology, and eventually Roman Mythology,too, were the 3,000 daughters of the Titans Oceanus and Tethys. They were all Nymphs of the sea, and though these Nymphs lived for a very long time, they were never considered immortal. Each Oceanid was a patroness of a spring, sea, lake, pasture, cloud, flower, pond, or river. Oceanids were sometimes very closely associated with personified concepts (such as spirits) and Titans in Greek Mythology like Calypso, Klymene, Asia, and Electra. Amphitrite was an Oceanid, and she was said to be the consort (partner, spouse, etc.) of Poseidon. Sometimes though, Oceanids were called Nereids. Oceanids were generally kind towards humans, and they inhabited both saltwater and freshwater. Oceanids have never been caught in any wars or significant events, and they are just an existing species that does not cause any harm or change things whatsoever.

The Pegaeae (Peg-eye-eye) were a type of naiad that lived in springs. They were often considered daughters of the river gods (Potamoi), which established a relationship between a river and its springs.
The Site of All Official Greek Mythological Concepts and Vocabulary