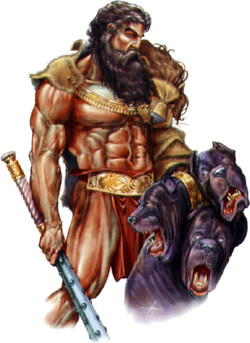 Hercules is a demigod, and son of the Olympian Deity Zeus and the mortal Alcmede. It was said that when Hercules was in his crib as a baby, Hera sent snakes down to kill him. When Hercules' mother found him he was strangling the snakes and threw them to space.

Hera hates Hercules because Zeus had a child with a mortal woman, so many times in his life she has tried to kill him. She eventually drove Hercules mad, killing his family, which caused him to perform the Twelve Labors.

Famous for his strength, he, on many occasions, has performed seemingly impossible tasks (Twelve Labors). He is the strongest demigod, because he is the son of Zeus.

Hercules' name was changed by the Pythian priestess at the oracle of Delphi, and it was changed to Heracles, or as we know him, Hercules. His original name was Alcides.

Hercules was married to a woman named Deianeira. A centaur named Nessus offered Hercules and Deianeira a ferry across a river that they needed to cross. Nessus took Deianeira first and tried to abduct her. Hercules then shot the centaur with an arrow that had poisonous hydra's blood on it, and Nessus was on the ground dying. he said to Deianeira that when Hercules started to love another woman, if he had the blood of himself, then it would restore Hercules' love. Deianeira trusted him and kept the blood in a vial. Years after Nessus died, Deianeira heard that Hercules loved another woman, so she smeared the blood on a cloak and told a servant named Leechas to give it to Hercules. Some blood fell on the floor and when the sun shone on it, the blood began to burn. She sent a servant to get Leechas before he gave Hercules the cloak, but he already had it. When Hercules put on the poisoned cloak (Poison from the hydra's blood), it burnt through his flesh. He jumped into a river to put out the fire and burning, but it became worse. He tore off the cloak and his organs with it. Then, angrilly, he threw Leechas into the sea. Hercules told a friend named Philoctetis to build a pyre on the mountain Oata. Hercules went there and sacrificed a bow and many arrows to his friend, and then burnt to death.

After his death, Zeus turned him into a god, and Deianeira, realizing what she had done, commited suicide.
The Site of All Official Greek Mythological Concepts and Vocabulary