Titans, Fathers and Mothers of the gods 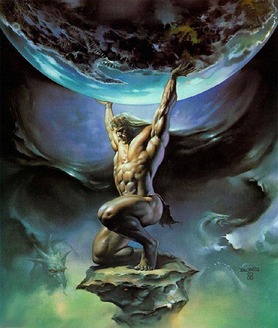 The Titans were a group of fathers and mothers of the gods. A war broke out between the gods and the Titans called Titanomachy. Eventually the gods won the war, so they cast most of the Titans into Tartarus, and made the leader of the Titans during Titanomachy, Atlas, bear the axle of Heaven on his shoulders for eternity.

An individual Titan is more powerful than one god, but the Titans and gods didn't stay on the same sides all of the time.