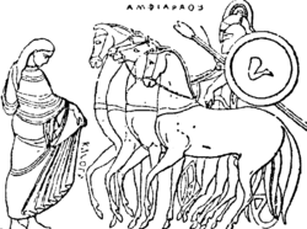 Amphiaraus was the cthonic son of Oecles and Hypermnestra and the husband of Eriphyle. Amphiaraus was the king of Agos who ruled along with Eriphyle's brother Adrastus. He was greatly honored during his lifetime, and could see into the future, and Zeus and Apollo favored him. Zeus was the one that gave Amphiaraus his oracular talent.

Eriphyle persuaded Ampiharaus to take part in the Seven Against Thebes War against Amphiaraus' better judgement, and he knew he would die if he joined in the venture. Eriphyle wanted Amphiaraus to join because the Polynices offered her the daughter of Aphrodite, Harmonia's necklace. Amphiaraus reluctantly joined the war, but he was aware of his wife's corruption, as it was a bizarre thing to ask. He asked his sons Alcmaeon and Amphilochus to serve his revenge by killing Eryphyle should he be killed in the war. As he and the soldiers went off to battle, he repeatedly warned them that this would fail, and he blamed the whole war on Tydeus, whom he would later prevent from getting immortality from Athena. Even though this happened, Amphiaraus was still the best leader in the battle. During this battle, he killed Melanippus. He fleed from the son of Poseidon, Periclymenus, because he sought to kill Amphiaraus. Zeus ended up taking care of Amphiaraus by throwing his bolt. The earth opened and seallowed Amphiaraus and his chariot whole. At the sanctuary where he ended up, he was consulted and propitated.

After Alcmaeon found out about Eriphyle's death, he killed her, and fled across Greece because the Erinyes (Furies) persued him. He ended up in the Court of Phegeus, who gave him his daughter Alphesiboea's hand in marriage. Alcaeus asked the oracle how he could avoid the Erinyes, and it told him to go where the sun wasn't shining when he killed his mother. This place was the mouth of the river Achelous, which had been silted up. Achelois himself promised Alcmaeon his daughter Callirhoe in marriage if he agreed to retrieve the clothes and necklace his mother wore when she persuaded Amphiaraus to take part in the battle. Alcmaeon had given the necklace to Phegeus and when Phegeus found out about Amphiaraus' plan he had his sons kill Almaeus.

In the Sanctuary of Amphiareion, he was worshiped with a hero cult and was known as a great healing and fortune-telling god who was associated with Asclepius. He was related to the great seer Melampus and when a petitioner came to a temple, after maybe a few coins or ram sacrifice, they would receive a dream saying the solution to the problem.

In some traditions, he was said to have a daughter named Alexida.