Oceanides, The Offspring of Oceanus 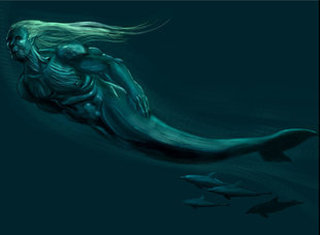 The Oceanids (Oh-she-ann-id) in Greek Mythology, and eventually Roman Mythology,too, were the 3,000 daughters of the Titans Oceanus and Tethys. They were all Nymphs of the sea, and though these Nymphs lived for a very long time, they were never considered immortal. Each Oceanid was a patroness of a spring, sea, lake, pasture, cloud, flower, pond, or river. Oceanids were sometimes very closely associated with personified concepts (such as spirits) and Titans in Greek Mythology like Calypso, Klymene, Asia, and Electra. Amphitrite was an Oceanid, and she was said to be the consort (partner, spouse, etc.) of Poseidon. Sometimes though, Oceanids were called Nereids. Oceanids were generally kind towards humans, and they inhabited both saltwater and freshwater. Oceanids have never been caught in any wars or significant events, and they are just an existing species that minds their own business. There are 191 known and identified Oceanids in Greek Mythology.
The Site of All Official Greek Mythological Concepts and Vocabulary